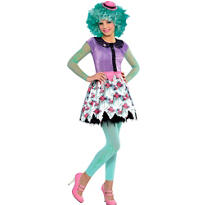 First, let me say this costume is very comfortable and great quality! The wig was suprisingly clawsome and is exactly like our favorite swamp-diva, Honey Swamp! The feathers do tickle a bit but thankfully Party City has a brilliant design team that thought of tights to cap off this killer design! It is very true to size so for our curvy ghouls make sure you try it on first, which Party city is happy to let you do in the 1000’s of stores nationwide.

What do we get?

For Monster High fans looking to dress up as their favorite fashion-forward swamptastic ghoul, this costume is well-suited for both Halloween and everyday dress-up.

The Monster High line of Children’s Costumes are for ages 6 and up.
Maybe Honey Swamp isn’t for you? Well here are some of our other personal favs from our friends at Party City

If the name Party City sounds familiar, chances are you’ve come across it before. That’s because Party City is the country’s largest specialty party goods chain, with more than 600 company-owned and franchise stores located throughout the U.S. and Puerto Rico. The company’s online party goods store is an extension of all the great offerings found in the brick-and-mortar stores.
Although its competitors may specialize in birthdays or themed parties, Party City is the place to shop when it comes to everything Halloween. The site has tons of costumes and accessories and all the supplies you’ll need to throw a spooky, spectacular Halloween party. A few of our favorite items include tombstones, skeletons and life-size cutouts.
Once October 31st passes, Party City is still a great store to shop for all your other party needs. They offer basic party supplies for virtually every other holiday and celebratory occasion throughout the year. The site has an impressive collection of invitations and wedding supplies; brides-to-be will find all the accessories they need for the ceremony, reception and pre-wedding festivities.
While the site is simple to navigate and products can be found relatively easy, it lacks the extra features that many of their competitors offer, such as party-planning tips. However, one thing we liked was on the bottom of each product page is a section titled “More Ideas…” where a few other related products that you might be interested in are listed.

Frankie Stein® has lost her spark! But her beast friends forever are rallying to give her a helping claw and get her recharged. Much of the action happens far below the howlways of Monster High® in the creepy cool catacombs – recreated with this play set. Three stories high and featuring multiple places for ghouls to fang out, the Monster High® Freaky Fusion™ Catacombs set has all kinds of uhhmazing options for play and display – plus some scary cool secrets as well!

Top to Bottom Play and Display
Enter the Catacombs from the Monster High® courtyard at the top. Enjoy a snack at the cafe table. Give it a spin to reveal creepy cool effects on the pillars and in the party rooms: eyes peek through cracks and the chandelier rotates. When no one is lurking, take the gravestone elevator down one floor to the hybrid lounge or pass through the black gates and take the winding stairs – they go all the way to the bottom. Spin the dragon statue to uncover a doll clip that allows a ghoul to fang out on the balcony.

Transformation and Surprise
Go down one more flight – take the stairs on either side – to hit bottom! The lowest floor features a party room with a secret passage that leads to the underground lab – place the clock hands on “1” and “3” to open the hidden door and gain entry. Fang out on the couch and work at the bench. When the experiment is done, head next door to relax – the pool flips to reveal an uhhmazing party scene.

Monster Entertainment
With additional clips for Monster High® ghouls to fang out (dolls sold separately), it’s sure to be a monster mash-up! Collect other Monster High® dolls and accessories to expand the storytelling fun to horrific proportions. Play out favorite scenes from the Freaky Fusion story. It’s monster entertainment.

I am here at SanDiego Comic Con bringing you news, releases, and maybe even some scare-tastic rumors from our fav Mansters & Ghouls at Monster High! Most posts will be picture heavy and of course I will have a wrap up next week! Also join us on Facebook to get news LIVE!

Freaky Fab13 Alert: One Night in Scare-adise is tomorrow! 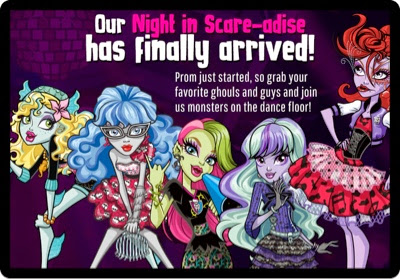 Hey Ghouls & Mansters, It is the night before Zombie prom! I am sure everyone is running around like a werewolf on full moon Friday but we have to remember this is a very special night to howl & growl for the student bodies of Monster High. So here is your official Poster if you can’t be there and a ticket to always cherish the night in scare-adise. Have fun Mansters & Ghouls and stay safe! Happy prom!

So tomorrow night have a frightastic time, and remember to go off the fang with our fave ghouls & mansters as we celebrate our prom and your special moments this year both in and out of Monster High. Have a special moment from this year share it with us here.

Some new pictures coming in from our friends south of the border that I simply had to share with you all! Please feel free  to share and link back to us!

Oh My Ghoul! Can you believe the uhhh-mazing appearances of Madison Beer at the Hauntly-woof premiere of “Frights! Camera! Action!” Don’t you just love our ghouls Viperine, Clawdia, Elissa-bat, and Lagoona?
Get more pics and video below!

And Remember we will be reviewing the movie for you right here on Monster High Parents!

Thanks to our new friend No Time Mommy we have this post to share. These are her photos and finds so we want to give our ghoul her due credit as we get yet another clawsome look into the world of Monster High as they were at this weekends New York Toy Fair!
Now to the big reveal. Toy Fair Dolls

Of course they had the most of the dolls that have been released. I did not see a few dolls that are just being released like “Slo Mo”.
What I did see was

Hoodude Voodoo
I asked if he was going to be released and didn’t really get a answer, so fingers crossed.

Nefera and Webarella were also displayed. No confirmation that Webarella will be released this year as rumored.
So now to the new dolls:

Retail:$20.99 and will be available in June 2014
The rumored other new characters of “Sirena Von Boo”, “Avea Trotter” and “Bonita Femur” were not displayed.

Inner Monster Assortment: Customize the expressions of your dolls by changing their eyes, facial expressions and fashions.
featuring:
Retail:$21.97 and will be available June 2014

2 pack Werecat Sisters and Venus and Rochelle
Not sure on release date or price.

Catacombs Castle: You move dolls up and down with attachments
Release date has not been official, but probably June 2014 with Freaky Fusion line.
The next few dolls are in boxes, but please keep in mind they have not been released and were just for show. I do not have any release date info for these.

Scare Mester Catty Noir
As I said before I have no info on release dates for these dolls. I have another meeting with Mattel this week, so hopefully more info to come.

We’re bringing you all the clawsome deets from Toy Fair 2014 and mummies are howling over all of the off the fang releases from our friends at Monster High!
Below is pictures, info, and a video from our besties at Time to play Mag who have all of the best toy reviews, prices, and giveaways! Check them out for sure because the cool ghouls all know about TTP. I look forward to bringing you more news from Toy Fair 2014 and of course will be live on the floor of San Diego Comic Con in July.
https://youtube.googleapis.com/v/hFLK6yezpTU&source=uds

Monster High Fusion Doll AssortmentARP: $20.99 | Ages 6+ years | Available: June 2014In a freaky twist of adventure, our favorite Monster High® ghouls get accidentally fused together in ways never seen before! Choose from Lagoonafire™ (a mix of Lagoona Blue® and Jinafire Long®), Dracubecca™ (a fusion of Draculaura® and Robecca Steam®), Cleolie™ (a combination of Cleo de Nile® and Toralei®), Clawvenus™ (a blend of Clawdeen Wolf® and Venus McFlytrap®) and Neighthan Rot™ (a unicorn-zombie boy). Accessories include a to-die-for purse for each – except Neighthan Rot™, who has a hat with a hole cut out for his unicorn horn.

Monster High Recharge Chamber
ARP: $44.99 | Ages 6+ years | Available: August 2014
At the riveting climax of the Monster High® movie, Freaky Fusion, the beast ghoulfriends of Frankie Stein® rally around to give her back her spark with this hair-raising Recharge Chamber! Comes with a one-of-a-kind Frankie Stein® doll wearing a voltageous fashion and shocking shoes. Place her in the chamber, and press the button for hair-raising fun – her hair literally rises into a shocking ‘do! Press the light again for a spooktacular light show for clawesome room decor.

Plus the uhhh-mazing new 4 foot tall Catacombs? Looks like 2014 is another banner year for Monster high!
Remember at Monster High We Stop Hate, and Be yourself, Be Unique, Be Your Own Monster!